I can't really tell if my spinach is doing well or not.  Only 3 of the spinach seedling survived and I probably destroyed the roots during transplant for one of them because the growth is stunted. The spinach is growing in a container with a volunteer lettuce (I think from musclin green mix) and kale.
Another thing...the spinach is hairy! It looks so weird, almost like tentacles.
It rained today in charm city, and there are little rain drops on the kale making them sparkle in the sun.  It is quite beautiful! 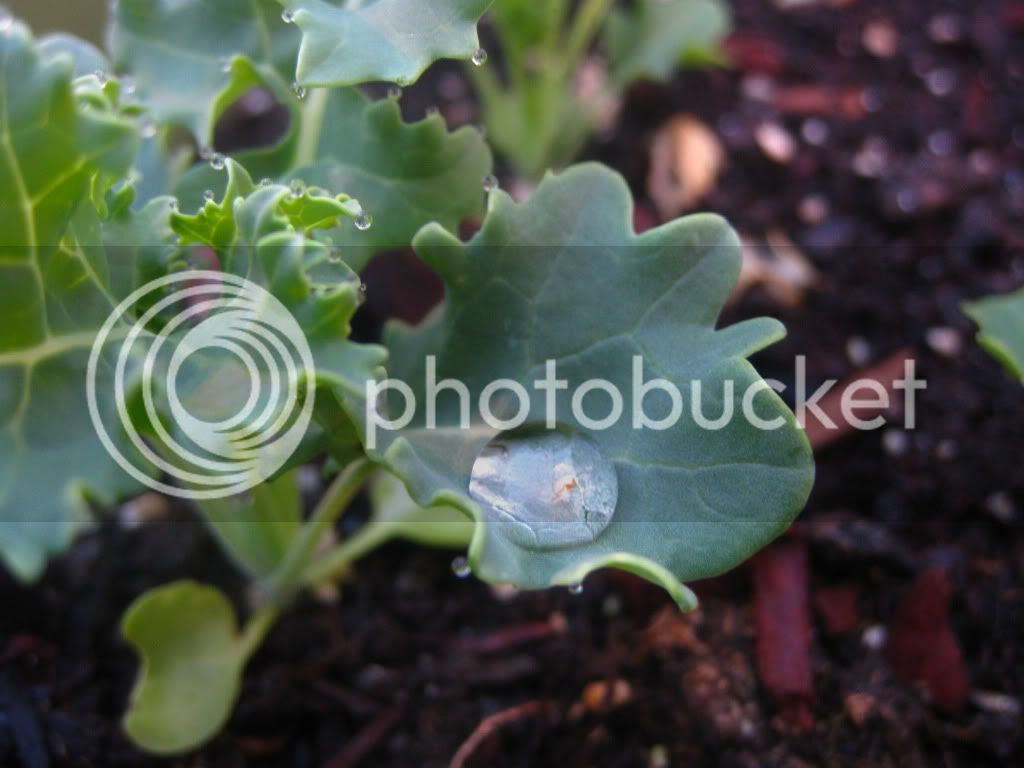 Posted by Charmcitybalconygarden at 6:11 PM 4 comments:

Pak choi is one of the easiest and most satisfying plant to grow. I also think it is quite beautiful. Although pak choi isn't particularly expensive vegetable to buy, it is a great vegetable to grow in my limited space. For now, along with the beets, it is doing so well on my balcony
Sometimes laziness has great rewards in gardening. Last year I got lazy and didn't clean one of the pak choi plant. Fortunately for me, the plant flowered and now has produced seed pods. 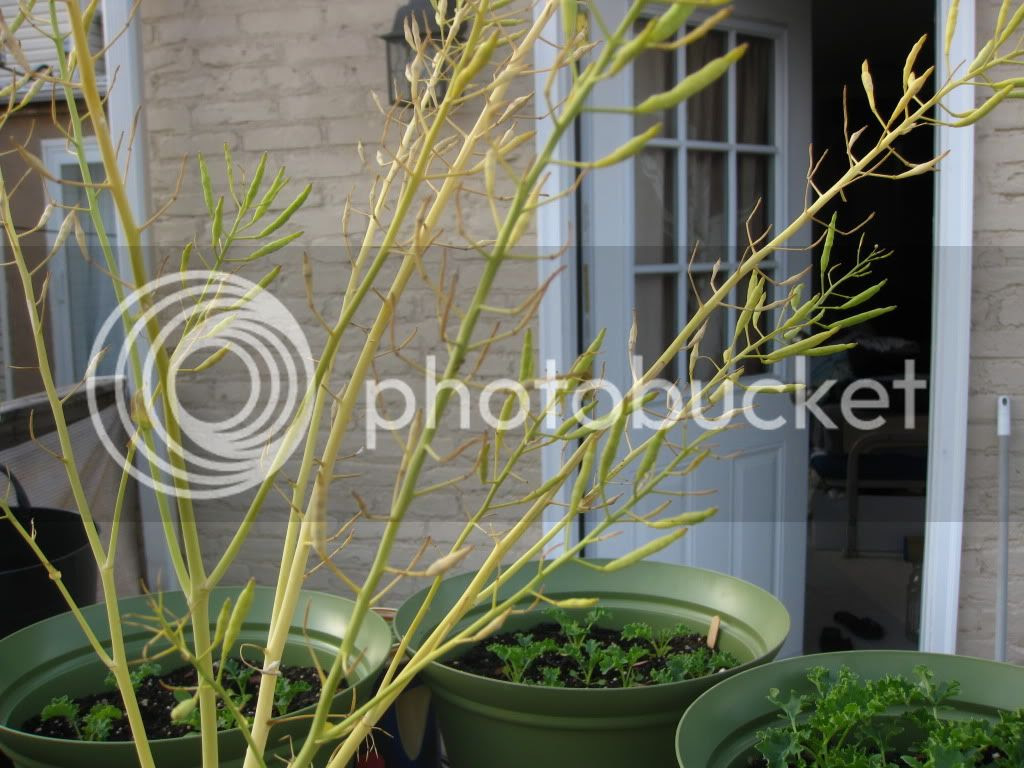 The seeds are super easy to collect. Hopefully, unlike the ichiban eggplant, these seeds will be viable. I sure will have a lot of seeds! 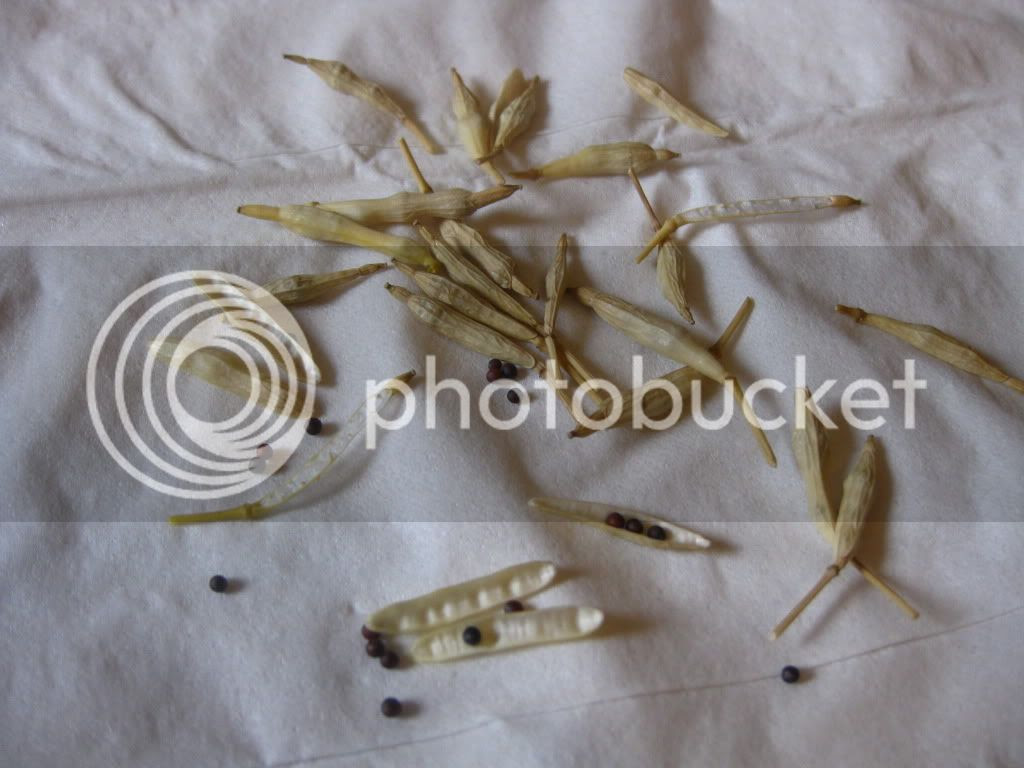 Posted by Charmcitybalconygarden at 6:51 PM 4 comments:

The tomato, summer squash and pepper starts were screaming to be transplanted and fertilized. The ichiban eggplant seeds still did not germinate but I read somewhere that seeds saved from ichiban eggplants don't do well. So maybe it wasn't me. Whatever the reason, I bought a starter plant so I will have eggplants this year.
The rosemary flowered beautiful, but now the flowers have gone and the plant isn't doing so good. It is turning slightly yellow and it just looks brittle overall. I need to do some research to see if I should cut back some of the branches - perhaps to promote new growth.
On a completely different note, I have been obsessed with reading and watching videos about urban farming/urban homesteading. I'm really itching to have a backyard. For now I will continue to live vicariously through other people's blogs and videos. I found some great series of videos called "Grow" from Whole Foods youtube channel. I don't know about keeping livestock, but I love the idea of having a lush backyard with whole bunch of vegetables and fruits. I almost went out to get a blueberry plant, but I know, I just don't have space. Boo hoo!

Posted by Charmcitybalconygarden at 4:22 PM 4 comments:

Last year I brought back empty coffee mate containers from the office to use for the garden but didn't have a chance to use it. Now that I have too many plants in some containers I thought I'd make recycled container planter.
This would be such a fun thing to do with kids. I almost called up my friend to borrow her child's hand to put hand marks instead of the stick flowers. I decided to put swiss chard in the containers. This is the 2nd time I transplanted these plants, so we'll just have to see if they survive the final move. Last year, I did not have much success with swiss chard - I'm not quite sure why. Hopefully, this season it will do better.

Update: Acrylic paint is not weather resistant. It rained and now the paint has bunched up. Since it did not peel off, I am going to try to put a clear water resistant film over it. Need to do a little research to see what is safe.
Posted by Charmcitybalconygarden at 5:23 PM 6 comments:

The kale and beets are growing steadily, but I think I may have overcrowded the container. With the kale, it is clear that the container with fewer plants is doing better. I want to thin out the crowded container, but rather than pulling the plants I plan to transplant them to another container. I am fresh out of containers, so I will either have to go buy more or use smaller containers and plant one per pot. Unlike the kale, the beets in the smaller container (presumably with less root space) is doing better than the larger container. The spacing is about the same and I also used the same soil so I don't know what's going on.
I also transplanted 2 mild jalapeno starter plants into self-watering containers (3 gallon) I found at Lowes. This is about the same size as the 13" Mainstay self-watering container I buy at Walmart. They are about the same price but I think the Mainstay container is better quality. Anyway, I've started a little experiment with the jalapeno plants. In one container (the middle) I used 100% new potting soil, and in the other I used recycled soil with fertilizer and cow manure.  It'll be interesting to see if there are difference between the two.
I have spotted some aphids on the pak choy plant from last season that is beginning to seed. The aphids are attracting ladybugs! 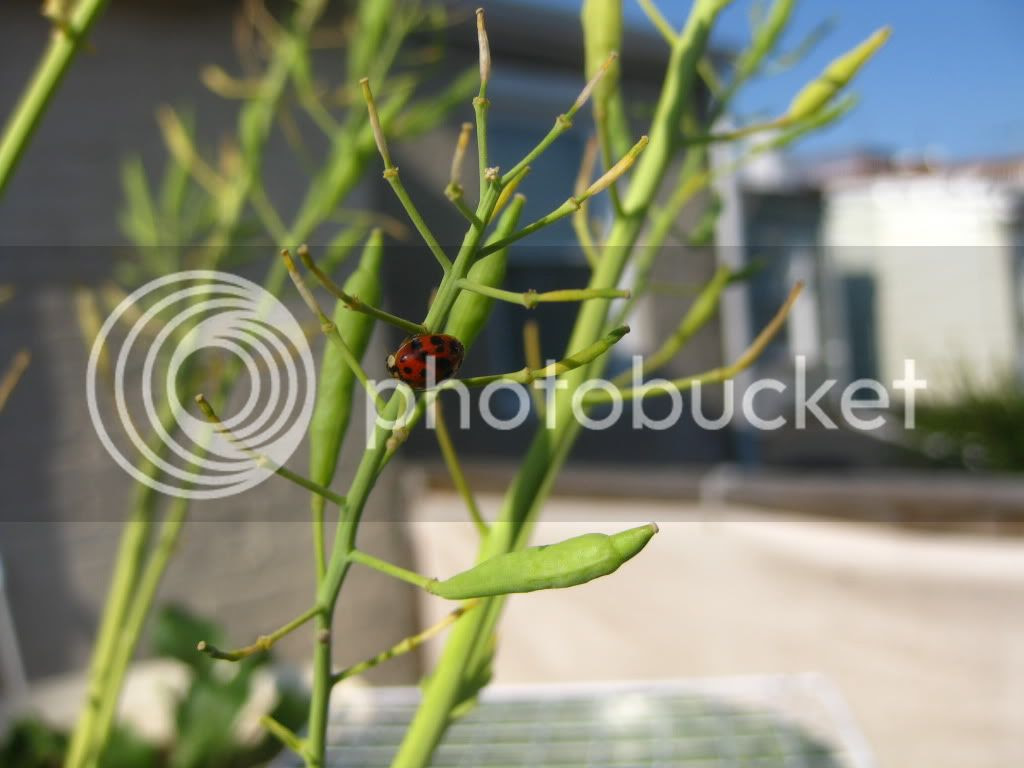 I also spotted the first set of flowers on the bush early girl plant this weekend. I am a little concerned that it is too early to leave the tomato and jalapeno plants outside, but it has been quite warm so hopefully all the plants will thrive.
Posted by Charmcitybalconygarden at 8:22 PM 5 comments:

I have new seedlings! Exciting. I started tomatoes, peppers, and summer squash 2 weeks ago. I also tried using the ichiban eggplant seeds that I harvested but I must have done something wrong while collecting the seeds because it is not germinating. I'll just keep waiting to see it just needs more time but I might just have to go buy starter plants. Oh well, I'll try seed saving again this year - this time I'll do a little more research so I have viable seeds. The tomatoes I started are supersweet 100, cherokee purple and pink champions (from Annie). The pepper seeds (Giant Chinese pepper) germinated a week after the tomatoes.
I also started some cilantro (again from Annie - thanks so much!). I read somewhere that cilantro seeds (aka corriander) contain 2 seeds per pod so it should be cracked before sowing. I'm not sure if splitting the seeds helped but it only took about a week to germinate. Right now they are on the windowsill but I'm thinking once they are reasonably grown I'll transfer them to the pots in front on the house.

Posted by Charmcitybalconygarden at 6:55 PM No comments:

Updates on some the seedlings at week 6.
In anticipation of harvesting a whole bunch of kale in the *near* future, I wanted to test out some recipes. I tried making kale salad with avocado which I did not like so much. Raw kale tasted too green (or grassy) and it was too much fiber for me to handle. My jaw was tired from all the chewing and I could feel the kale sitting in my stomach (which is rare because my stomach usually is very efficient at digesting).  Last night I made a salad that had about a cup of raw kale with some romaine and other vegetables. This was a good balance and it also made for a very colorful salad. Next I loosely followed a recipe for crustless spinach quiche - switching out spinach for kale. I also used cottage cheese rather than the cheese suggested in the recipe.
Honestly, this doesn't really taste like quiche. It is more like a frittata or omelette (not sure if these are different). I think I need to use creme to get the quiche texture and flavor. But perhaps this is a healthier/lower calorie alternative. It is pretty good, except next time I need to use less salt (I used more than the recipe called for) and more onions.

I'm linking to Wendy's blog for garden to table challenge - I did use thyme from the garden:) Thanks Wendy for hosting GTTC!
Posted by Charmcitybalconygarden at 7:56 PM 6 comments:

Email ThisBlogThis!Share to TwitterShare to FacebookShare to Pinterest
Labels: kale

I'm glad I decided to empty out the container before sowing/transferring transplants. In one of the 5 gallon container, I found this: 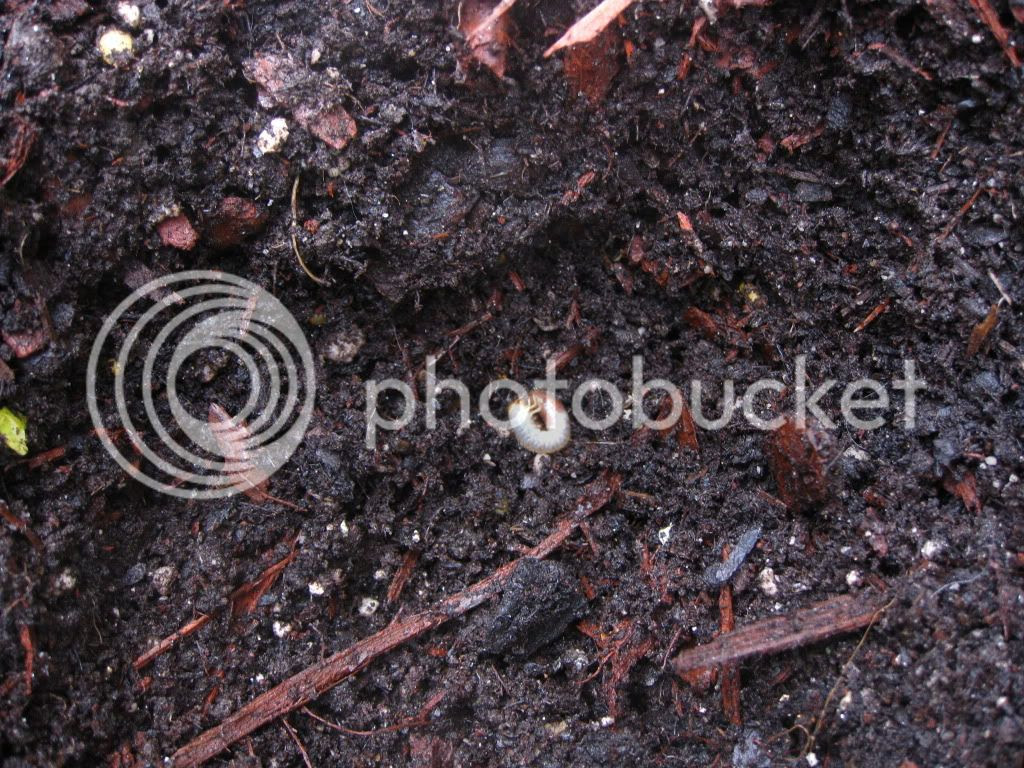 Nasty! Nasty! White grub! I think this is larvae of some sort of beetle. This container was FULL of grubs (picture below). But others had none - it is possible that I missed some but they are pretty easy to spot because they are so white. Once you take them out of the soil, they start crawling around looking to dig themselves back into the soil. I feel a little guilty throwing them on the cement for the birds to find them...but their crazy looking mouths looked like it can do some serious damage to plants so it is probably best to get rid of it now. 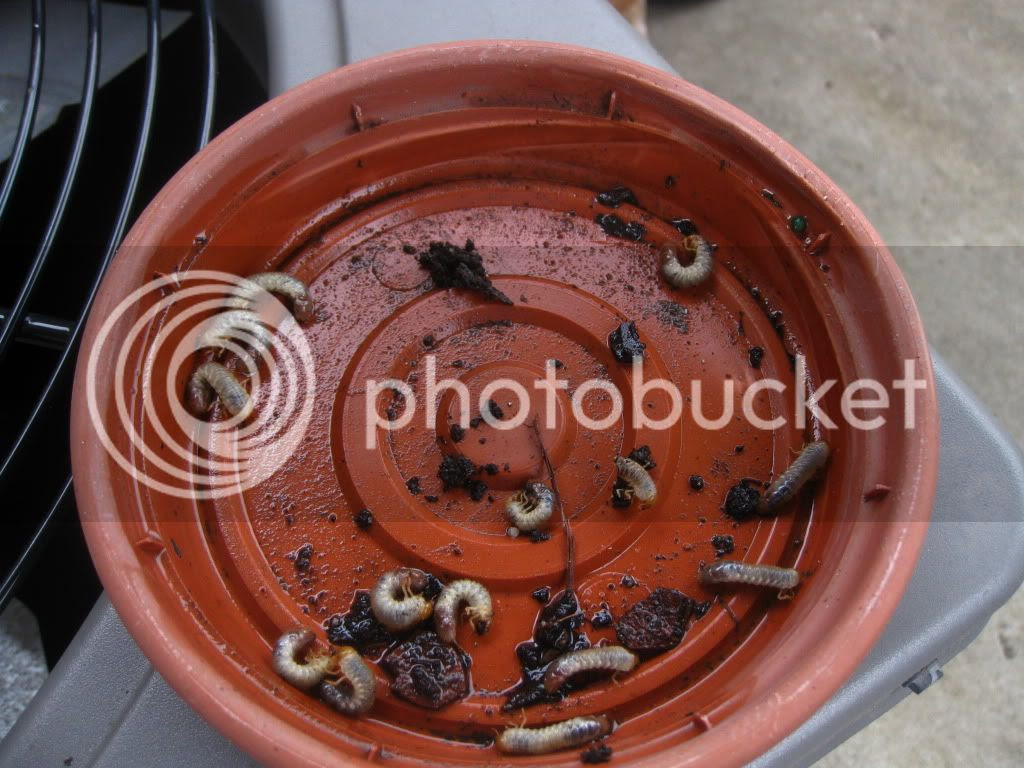 There is a great article about recycling soil in containers at you grow girl blog. I'm glad Gayla also reuses her soil. I can't imagine buying new bags of soil, plus it would be extremely challenging to find a place to put the old soil.
Posted by Charmcitybalconygarden at 4:44 PM 4 comments: