I got me some taters!

Stopped by the grocery store on my way back from work. I naturally gravitated towards the organic potato isle...and couldn't help but notice the yukon gold already with some shoots. The purple potatoes also caught my eyes (thank you Linda for the tip!). I also grabbed a handful of creamer potatoes...which I later found out was just young potatoes (most likely yukon gold).
I'm going to leave the potatoes out and see if I can get more shoots. The purple potatoes taste just like a regular potato but it just looks so cool.
Posted by Charmcitybalconygarden at 7:39 PM 2 comments:

I was itching to play with soil all day today. I'm not exactly sure why...maybe because it was a sunny day. By the time I get home, its just too dark to do anything. But today, I was absolutely determined to do some gardening. So I set up a gardening station in the living room. 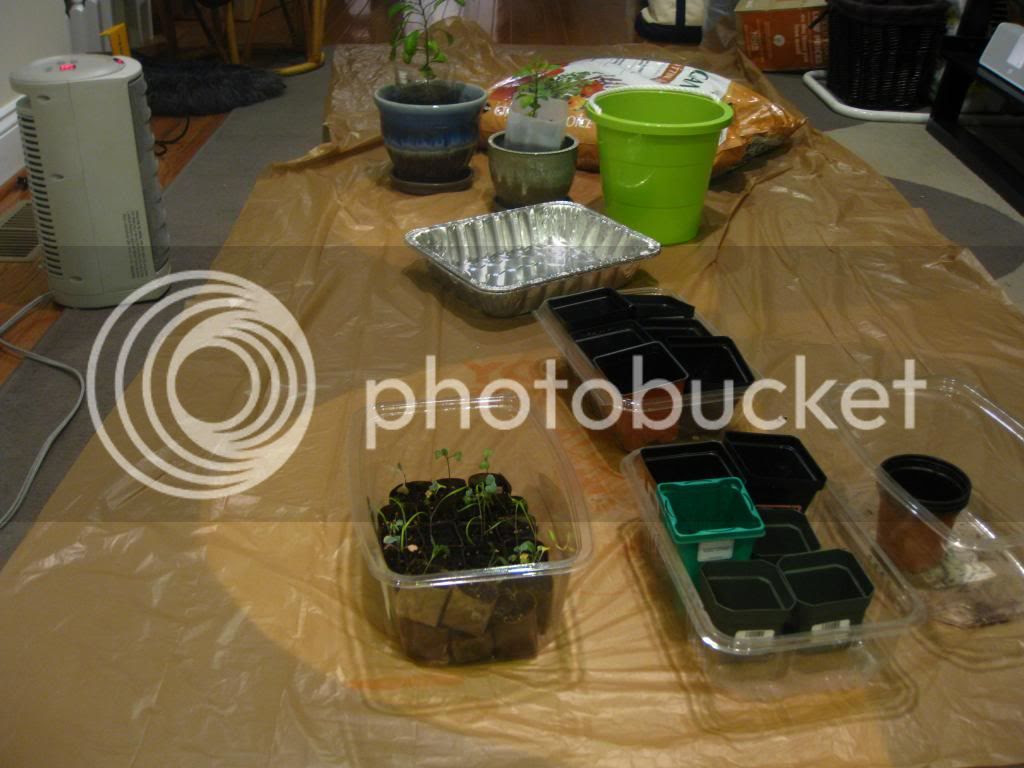 The first seeds that I started were way overdue for transplanting to larger containers and in need of nutrients. I also transplanted two yuzu tree into larger containers.
It was great to play with soil. Just can't wait for the weather to warm up.
Posted by Charmcitybalconygarden at 8:37 PM 6 comments:

The freezing temperatures continue, but I really wanted to do something in my garden. So I decided to clear some of the plants that were left over from last season. I had kale and bok choy. The bok choy were all brown and not edible, but there were several kale leaves that were still green and delicious looking. I harvested the leaves that looked alright and decided to cook them up for lunch. I didn't think this was anything worth blogging about, but when I took a bite after blanching it...oh my goodness. These kale, were the sweetest and most delicious kale I have ever tasted. I immediately ran to get my camera to show how green and beautiful they looked.
I now regret pulling them out. I've read the cold boosts the production of sugar in greens, but never thought kale could be quite so sweet.

My gardening obsession is really starting to pick up again too. I went to walmart and couldn't resist walking through the gardening department. I found this:
Initially I was really excited, but after some time it came to me that I can just use a compost bag.  After a quick search, it looks like a lot of people do this. So now, I am debating if I should return the potato bag. I'm going to think about it some more...but I guess this means that I will be growing some potatoes this year.

Also, I recently purchased a worm bin! I'm really excited about being able to make my own worm compost at home. My first year, I tried making a small compost bin, but it ended up just being a stinky mess. Hopefully this project will turn out better than my first composting attempt. 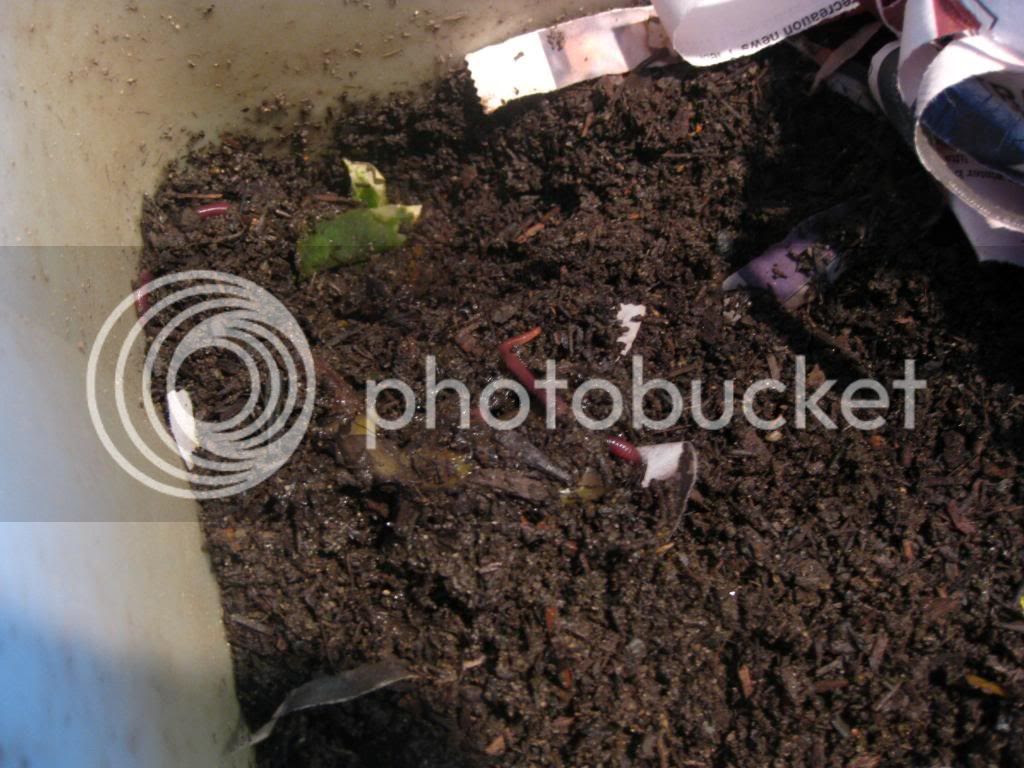 Posted by Charmcitybalconygarden at 4:22 PM 3 comments:

Last year, we had one red onion that started to grow shoots. My boyfriend told me to put into some soil and it will grow. It was the end of the season, so most of my pots were empty. I haphazardly plunked the onion in the center of a 5 gallon container, covered it with soil and forgot about it. This year, I noticed green shoots peaking out of the soil. Since the onion is right smack in the middle of the container, there is a lot of extra space around the onion. I wanted make use of the space, so I decided to try planing some garlic. I know it is kind of late in the game, but who knows. Maybe I'll get some tiny bulbs. Let's see how it goes.

Posted by Charmcitybalconygarden at 8:03 PM 3 comments:

I had my first harvest of the season today! I chopped the top of my extra snow pea tips and added it to my salad. The peas added a beautiful deep green color. I wish I had a whole bunch more for stir fry, but it was quite delicious in the salad too.
I made 3 purchases for the garden in the last few days. The first arrived today.... 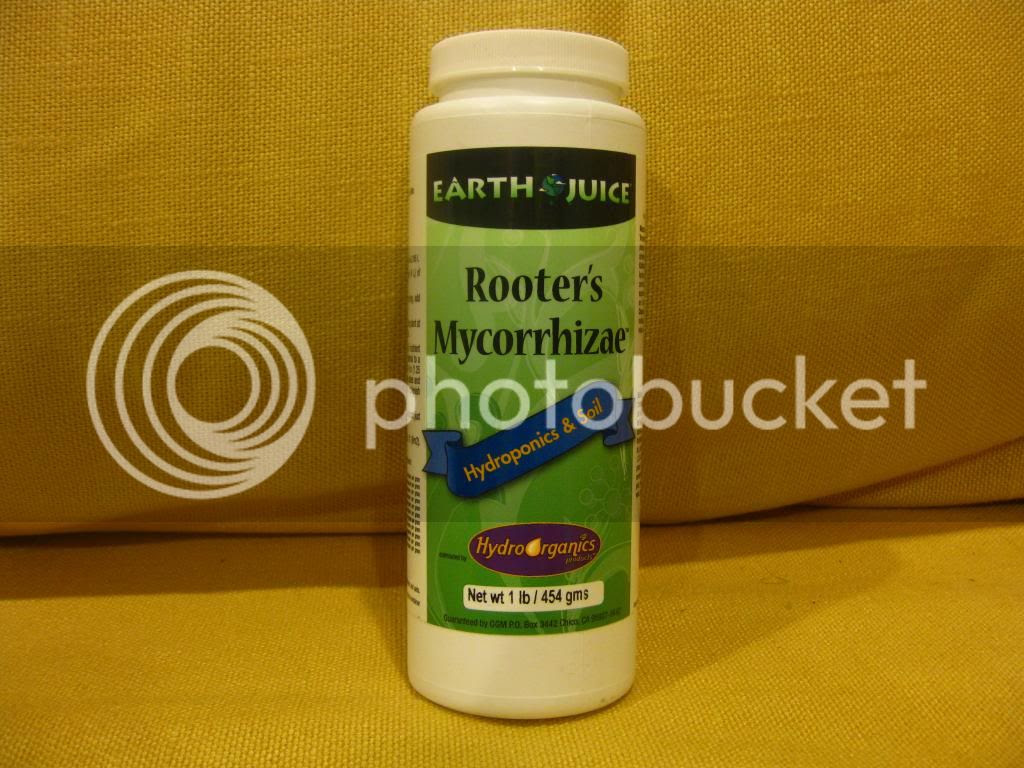 I've seen garden videos that show the amazing effect of mycorrhizae on  vegetable plants. Of course I will have to run a little experiment to test its effectiveness for vegetables grown in containers. I'm really excited to see the effect it has.
Posted by Charmcitybalconygarden at 7:03 PM 2 comments:

I have absolutely fallen in love with Jerusalem artichoke. I love to eat them raw in a salad but they are also super scrumptious stir fried with a little bit of oil and garlic. I have been reading again and again how easy it is to grow this root vegetable - I guess it is practically a weed. I am so excited to be growing them this year. The plan is to grow them in my larger 18 gallon self watering container. My thought is to grow the Jerusalem artichoke with fava beans, mache and arugula. I want to put them in soil as soon as possible, but we are still getting freezing temperatures. So I put one of the artichoke in soil in a little container about two weeks ago. 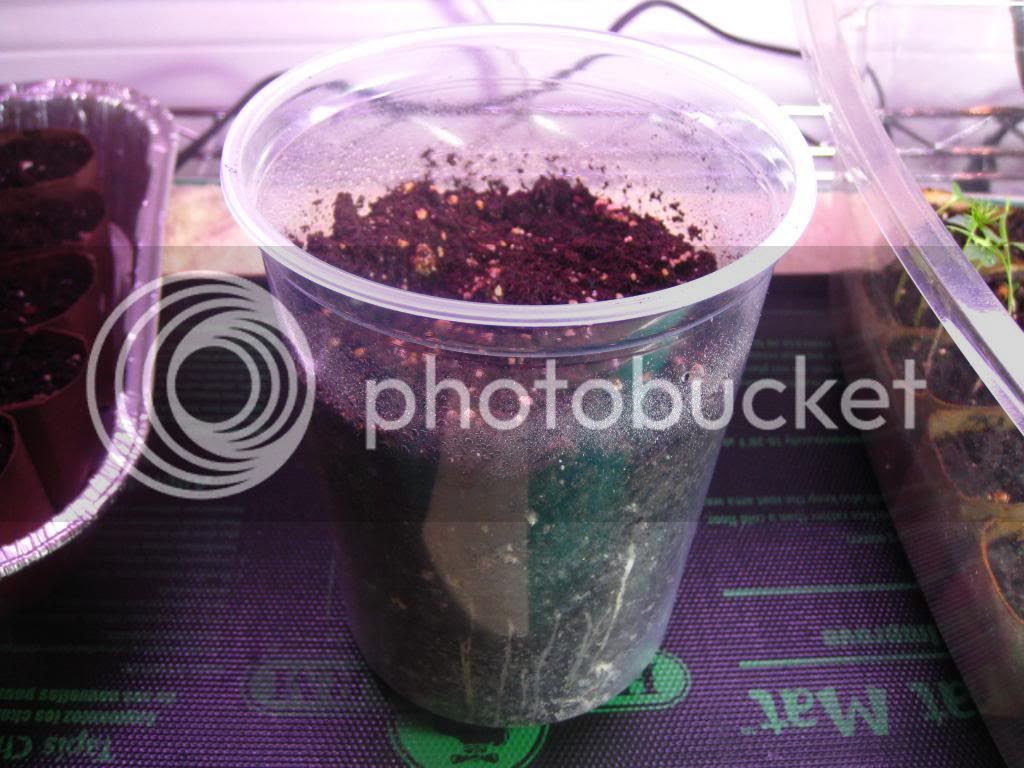 And now...I have roots!! So very cool! I can't wait to put them in their permanent home. 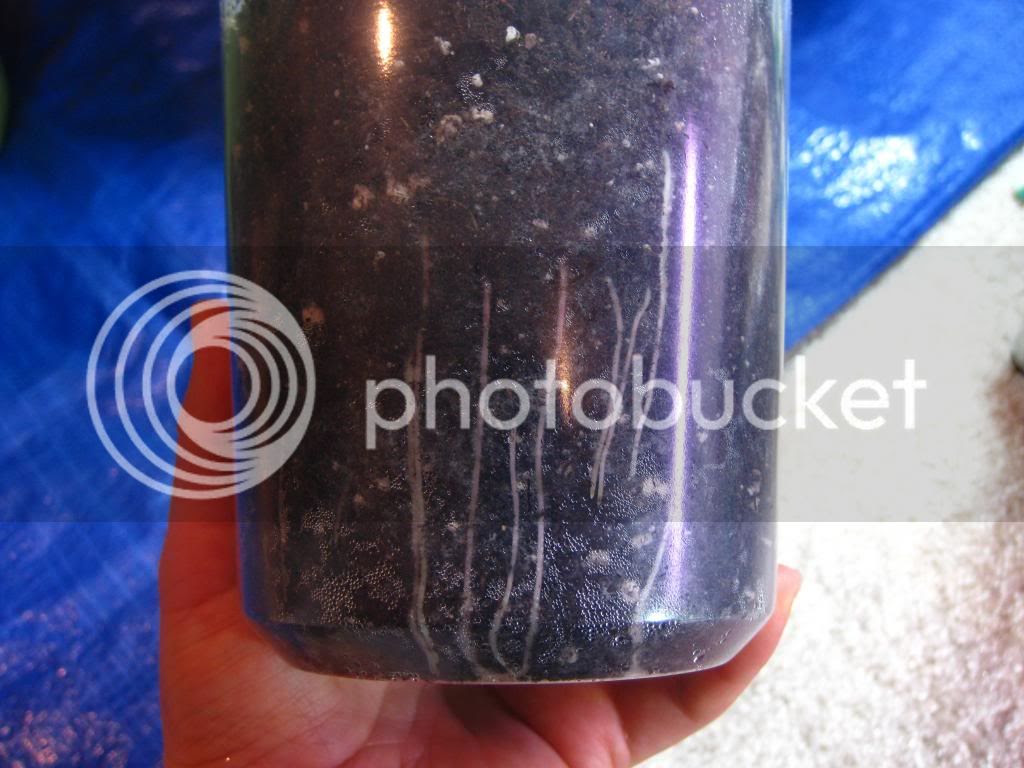 Here is also a little update on my yuzu tree that I started from seed around May of 2012. I think the size difference is completely due to the difference in container size. I plan to repot them both into bigger pots. I'm really excited about these tree seedlings and can't wait to get some yuzu fruit.

Posted by Charmcitybalconygarden at 6:26 PM 4 comments:

I'm really excited that the little seedlings are growing quite happily. The snow peas have outgrown their little starting pots and was starting to get big enough to get tangled with each other. Unfortunately, the soil is still frozen and I can't quite move them outside yet. So the only solution is to transfer them to the bigger pots and keep them indoors until it get a little warmer. Usually, I hate brining outside containers indoors because of all the insects living in the soil. I'm just hoping the freeze killed any critters inside so I won't have any creepy crawlies inside the house.
I am going to be growing these in the 3 3-gallon mainstay container. I was actually hoping to distributing among more containers for some nitrogen fixing, but it'll have to do for now. I finished transfer to one, I hope to finish the other two in the next few days.
I've never had very good luck trellising pes...it always ends up being a tangled mess. For the first container, I am using a combination of plastic poles from the tomato cage and string. I also plan to use metal grids that I used in the community garden if I can still find it. But I must say it was so much fun playing with soil again...even if it was inside.
I have another puzzle to figure out. I got some bay leave cutting and am trying to get it to root. I've had it in water for almost a month and I see no signs of roots. I've been reading that bay leave cuttings do better in soil. I'm going to take one ... maybe two branches and try to root them in soil. Hope it works since I really really want to grow my own bay leaves! If you have any experience with this, I am open to any suggestions.

Posted by Charmcitybalconygarden at 8:59 PM 7 comments:

I finally graduated from the little seedling setup on my windowsill and got myself a rack and lights. I have to say, I had some difficulties finding shorter shop lights and finally found it at Walmart.  It is an aquarium light (I think) but it did say grow light on it so I'm thinking it is OK. 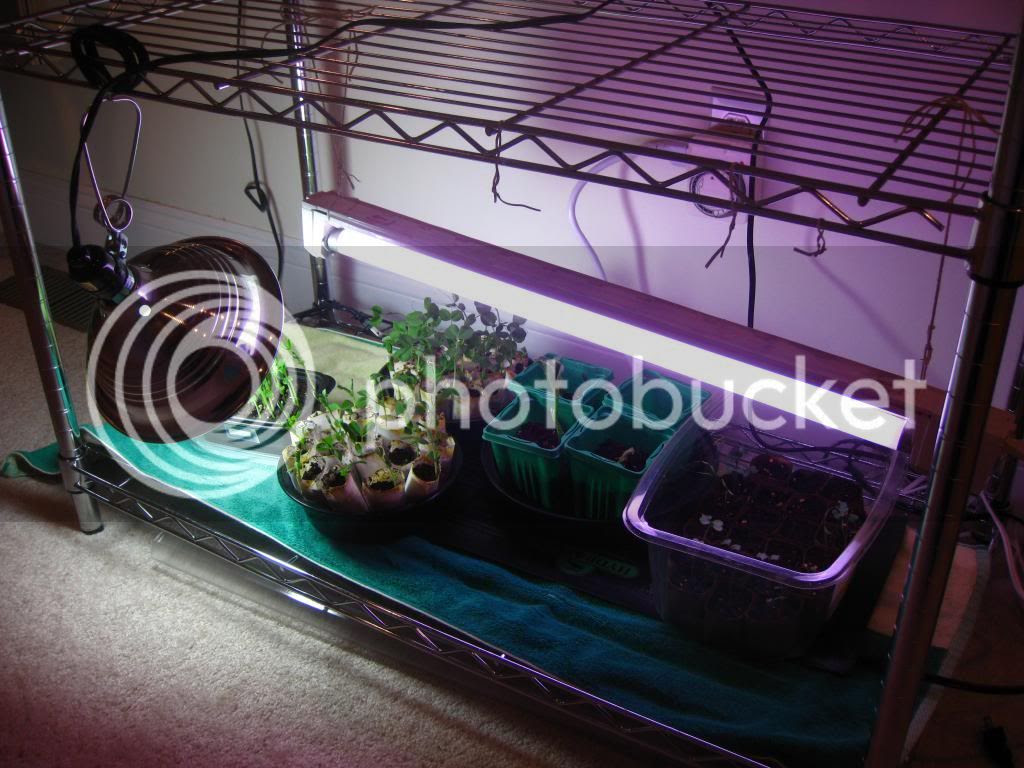 I sowed some seeds (broccoli, brussel sprouts, cumin, fennel, lettuce, red lettuce, mustard, marigold) on 1/23 so it has been a little over a week. Most of the seeds have germinated. The cumin and mustard seeds were from my pantry...and they have not germinated yet. Also, the lettuce has not either.
I started snow peas and fava beans in wet paper towels and them sowed them in soil. I may have started this too early as they grow pretty quickly. They are kind of ready to be transplanted outside but it is FREEZING outside. For the snow peas, I'll have to bring a couple of containers inside and grow them inside for a while. If I can just get home fast home before dark to change the soil...

Posted by Charmcitybalconygarden at 5:27 AM 2 comments: